Over the years, Thomas Dale Volleyball has always had competitive volleyball teams for girls and boys varsity.  This year, the girls varsity team had a strong team across the board that allowed them to fight competitively until the very end.

With a new head coach and losing the very talented senior outside hitter Sydney Frink, the Knights set out to prove that they were competitive as ever.  With their only losses against other talented teams such as Cosby, Clover Hill, and Matoaca, they were able to accumulate a 12-6 record.  Abby Nyquist, Monay James, and Samantha Peel provided strong outside hitting throughout the season that propelled them through each set.

Since the varsity girls had a better record than that of James River, they were able to host them for the first round of playoffs.  The Knights came out strong winning the first set 25-14.  The eleven point differential from this set had fans guessing that this would be a swift victory for Thomas Dale, but they were sorely mistaken.

Back and forth the two teams took set after set from each other extending the match to set five.  Both teams showed resiliency and persistence that prevented each other from giving up on each other.  Both ends of the court knew exactly what the consequences would be if they were to lose the match: a sudden end to their season.

Set five came and the Knights got off to a wonderful start leading the Rapids 8-2, but the set was far from over.  The Rapids rallied back to tie the game up 14-14.  Each point was hard-fought, but James River eventually ended up on top winning 16-14.

It was a tough loss, but as a team it is important to not dwell too much on the past.  A highly competitive, successful team is always looking for ways to improve for the future.

“Overall, we have definitely shown growth and improvement throughout the season,” said Kirk Jennings, Head Coach for the Knights.  “The best part of my experience here as a head coach was seeing girls improve and seeing their excitement when they play well.  We have a bright future ahead of us as long as we continue to grow and improve as a team.” 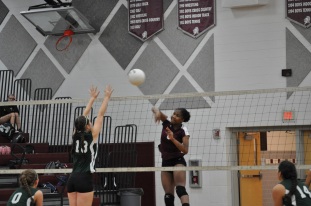 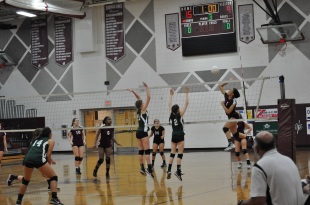 The Knights are losing some key seniors like Abby Nyquist, Destiny Callahan, and Kelly Waring, but underclassmen such as Devin Storey, Maggie Bradford and Samantha Peel have shown promise in leading the team to a successful season next year.

View all posts by tdavis45

Check out the Arts electives for next year on the TDHS Fine & Performing Arts website.

Want to work with the student newspaper or morning announcements?

Use this form to let us know your interests, and we’ll send you an invite to an after-school Knightly News Freelancer’s Meeting.